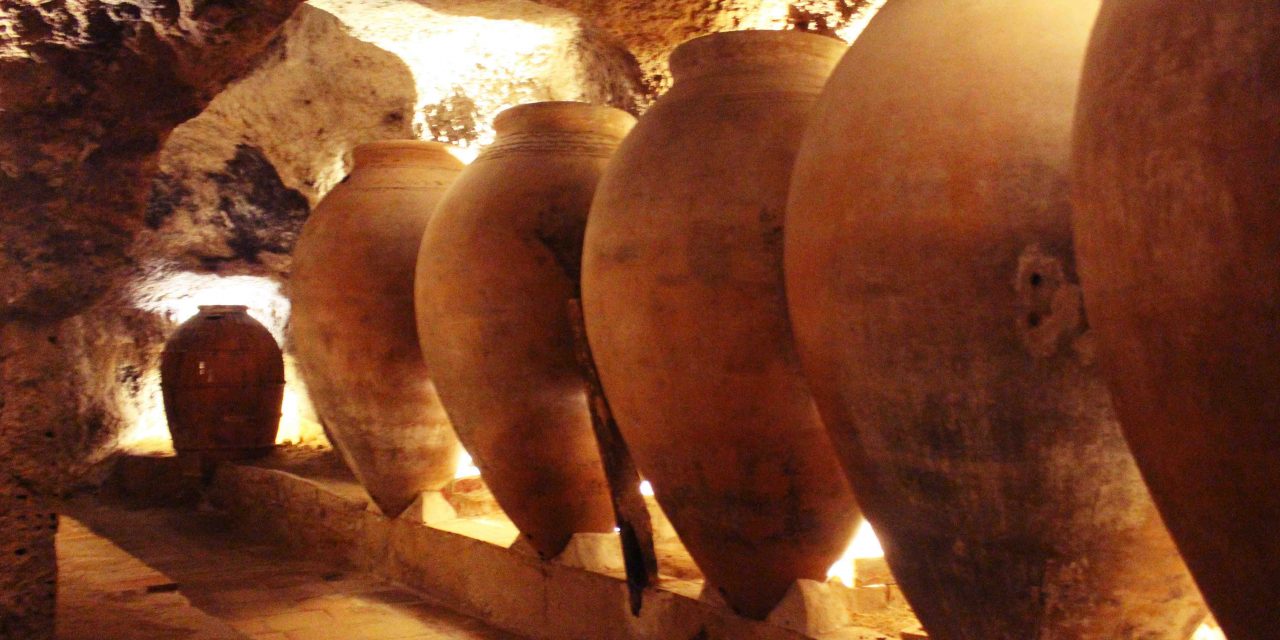 A new addition to my Blog Series Valencia Hidden Gems with another bunch of secret places in the region of Valencia, also called the Valencian Community.

While the city of Valencia is well established on the tourist track, with its Cuidad de las Artes y Ciencias being one of the Top Spanish Landmarks, the region of the Valencian Community is often featured in my Undiscovered Spain blog section due to its endless secret locations.

To begin with, let me remind you that Valencia Hidden Gems is a unique series of posts with local sights and landmarks you won´t find in a guidebook. As an expat in Spain, I keep traveling locally across the country every weekend, so my personal list of Valencia Hidden Gems keeps on growing all the time. Therefore, I try to share new off-the-beaten-track places in Valencia every month. Blog Subscribers might know that my residence in the Valencian Community has almost hit a 15-year-mark. So, this Series will constantly evolve and get updated with new secret travel destinations near Valencia.

Cueva Cerdaña is one of the most stunning caves in the Valencian Community, located near Pina de Montalgrao, in the province of Castellon. However, very much like Bosque de Oma forest of the Basque Country, a way to the landmark is an actual hike.

Nevertheless, I do not mention this hiking trail on my list of Top hikes in Castellon because it´s honestly the worst-marked trail I´ve done so far. Don´t follow the suggestions of Google Maps to find either Cueva Cerdaña or the trail (at least for now, these are completely wrong).

To visit Cueva Cerdaña you need to reach a small village of Mas de Noguera, where you can leave your car. Afterwards you need to cross the village and walk the local road before you notice a tiny trail on your left, taking you upwards toward the cave. It´s more or less 4,2 km from Mas de Noguera to the cave and the trail itself is beautiful, but we got lost a few times before finally finding it. Not to mention that every second person we met in the surroundings was asking for directions towards Cueva Cerdaña.

Besides all mentioned above, the cave Cueva Cerdaña is a hidden and untouched Spanish natural wonder, I recommend seeing it with your own eyes for sure.

Mirador Garbi is one of the most beautiful viewpoints in the whole Valencia region. Located 40 km from the city of Valencia, it is the heart of Serra Calderona Natural Park.

Mirador Garbi can be found on the top of the 593m-high mountain and offers some truly unique views of the region. In order to reach the peak of Garbi, you can leave your car at Parking Mirador del Garbi, and do a short 15-min-long walk towards the viewpoint.

However, as a part of Serra Calderona Natural Park, Mirador Garbi is also a final stop on several awesome hikes in Valencia, so you can also plan a whole Valencia day trip and test a new trail like a local.

Santuario de Cueva Santa is a beautiful ancient cave church, located 12 km from the village of Altura. This place used to be a refuge for the local shepherds. The chapel inside was built in the XVII century.

In order to visit the cave church, you should check its opening hours at the official website of Altura (unfortunately, the official info is in Spanish only).

Another one of the epic Valencia Hidden Gems – Los Organos de Benitandus, unique Spanish cliffs which slightly remind the yellow-orange landscapes of Almeria and its Wild West theme parks.

Los Organos de Benitandus also resemble a church pipe organ. You can find these stunning rock formations in the heart of Sierra de Espadan Natural Park near the tiny village of Benitandus in the Province of Castellon.

However, in order to enjoy the magnificent views, you´ll need to hike 12km with a 450m elevation gain. In my opinion, this hike has medium difficulty. The area is similar to the previously mentioned Mirador Garbi. Nevertheless, as the hiking trail towards Los Organos de Benitandus is longer than the one leading to Garbi, the area is less crowded.

In addition to the otherworldly beautiful landscapes of Los Organos de Benitandus, the nearest Onda Reservoir will definitely capture your attention with its turquoise waters.

The only drawback for me here was finding the right trail – it should have better indications. Long story short: you leave a car in Benitandus, cross the bridge towards the main road (look for the colorful route marks on the rock), then walk 500m along it to find the wooden sign marking the exact trail towards Los Organos de Benitandus.

As a huge fan of Roman Ruins in Spain, I constantly search for lesser-known Roman landmarks on the Iberian Peninsula. The Arch of Cabanes or Arco Romano de Cabanes in Spanish is an ancient triumphal arch built in the 2nd century AD on the Roman Via Augusta (one of the longest and busiest roads during the times of the ancient Hispania).

Archeologists believe that The Arch of Cabanes was built as a part of a private funerary monument connected with a local rural villa.

The Moorish caves (or Covetes dels Moros in Spanish) can be found in Bocairente, which many Valencians consider one of the most beautiful small towns in Spain.

The Moorish Caves are a group of artificial caves with window-like openings. It is the most complex and numerous group of cave windows in the area with over 50 windows leading to an equal number of chambers and distributed on 3-4 different levels. The caves are surrounded by various theories explaining their origins: burial chambers from ancient times, granaries, or even Visigoth monasteries.

It is difficult to determine the exact day of their appearance, although it is quite possible that The Moorish Caves were created during the Hispano-Arabic period. The interior of the caves may be visited (if you don´t mind a climb), which makes the whole experience even more interesting.

While Buñol is globally known for hosting one of the top Spanish festivities La Tomatina, the region is full of Valencia hidden gems.

Many locals consider Cueva Turche one of the most beautiful natural settings in the whole of the Valencian Community. The area is especially beautiful after the rainy days as its 60m-high waterfall gains force. In the surroundings of Cueva Turche you´ll find a few picnic tables because the place is popular among the locals in the summer months as a Valencia day trip.

Cueva Turche can be visited as a part of different hiking trails in Valencia, otherwise, there is no free place to leave a car nearby. The Parking costs 3-5 euros, depending on the time of the day.

The Roman Aqueduct in Chelva (also Aqueducto Romano de Peña Cortada in Spanish) offers a unique opportunity to walk across the ancient Roman water supply construction for all the fans of Roman ruins in Spain.

While this Roman aqueduct is a part of one of my favorite Valencia hiking trails, most travelers don´t complete the full route and return after visiting the Aqueduct of Peña Cortada.

Once you reach the small town of Chelva, follow a local unpaved road with indicator Peña Cortada towards the parking (also marked on Google maps). It will take you only 15 min of walking to get to the Roman Aqueduct. Note that this place is quite popular among locals on weekends.

You might have already gotten a quick glimpse of Montanejos swimming area in my posts about Valencia Day Trips and Top Places to Visit in The Province of Castellon. Long ago this beautiful natural setting was chosen by the Arabs as a perfect leisure spot: here they´ve built their thermal baths. But since 1863 locals could enjoy the Montanejos hot springs all year round – the water temperature is always around 25 ºC.

So if you´re aiming for a nice swim or want to check local hikes, let me warn you that Montanejos is very popular during the summer months. At the same time, I really enjoyed one of the hiking trails in December, called Ruta Sendero de los Estrechos, and I haven´t encountered a single person on it.

Cuevas de la Villa is a complex of 22 caves from the times of the Arab presence in Spain. La Villa caves are located in the small town of Requena, 68 km from the city of Valencia ( and also only 24 km from the haunted and abandoned village of Cornudilla).

The caves used to serve as storage for wheat and cereals, due to the natural stable temperatures inside. By sealing the wheat inside of the amphoras, with the help of fire the locals reached the effect of a modern vacuum package.

Nevertheless, the caves were abandoned in the XVIII century and rediscovered only in the 70s of the XX century.

For more Valencia tips, ideas, and itineraries check my Pinterest boards – Travel to Spain and The Best of Valencia Region 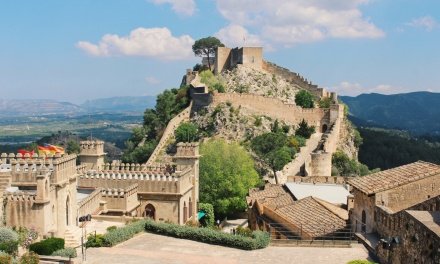 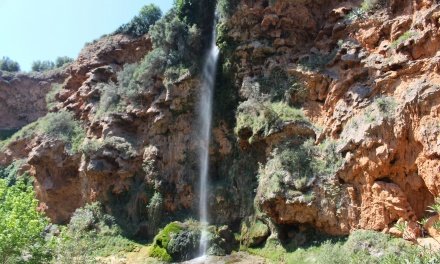 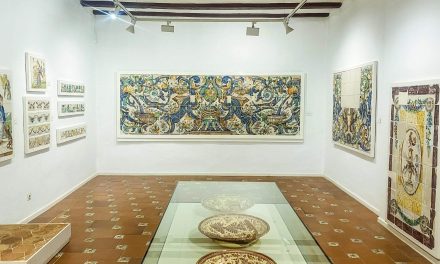