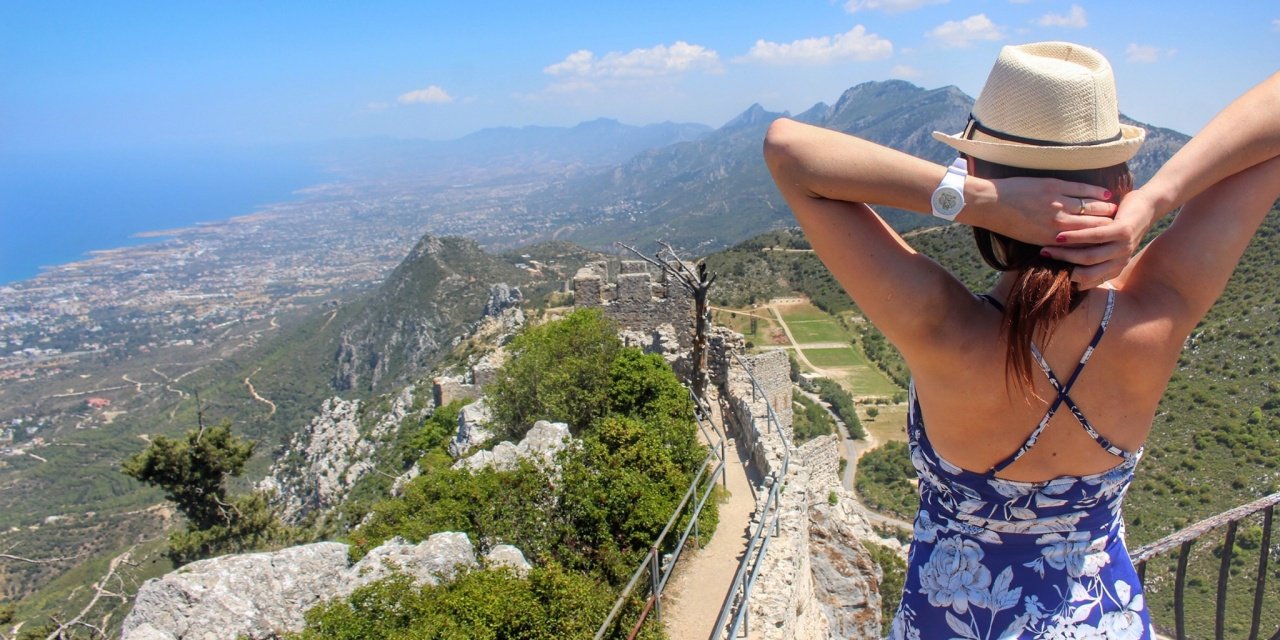 I simply can´t get enough of this beautiful Mediterranean island. Cyprus, probably, has the most relaxed atmosphere from all the places I´ve been to. Weather, food, sea … Who knows what makes this island special?! It feels like summer never ends in Cyprus. Check this Cyprus travel guide – hope it will inspire you to visit as well!

Being the 3rd biggest island in the Mediterranean, Cyprus is a must stop, whether you´re a solo traveler, honeymooner, beach lover, avid hiker, history explorer or a party person. Because this island really has it all.

As to my personal experience, I´ve been to Cyprus 3 times and I got to see almost all of its versatile sights and landscapes. The first time I was in Cyprus with my parents for a family vacation at the beach, 2nd trip – visited my sister during her semester abroad and we got to , and my last visit included an intensive sightseeing plan on both Greek and Turkish sides. Those were perfect vacations each one in its own way. What could serve as a better proof for the versatility?!

And let me add one here one more thing here: if I get another chance to visit Cyprus anytime soon – I won´t miss it.

Crossing the line: Turkish vs. Greek side of Cyprus

You can´t really wrap up a useful Cyprus travel guide without sharing some of the historical and political insights on the region. As you probably know, the island of Cyprus is divided by a border into two parts: the Greek (South) and the Turkish (North).

My first two Cyprus visits were only to the Greek side, which by the way, historically has a huge British influence (you even drive like in the UK). Therefore, when I talk about the laid-back lifestyle and summer vibes of Cyprus – it´s the Greek side that pops into my mind.

Nevertheless, once you cross a border you effortlessly deep into another very different culture. If you ever visited Turkey, you quickly catch the difference between the two sides of Cyprus. Everything becomes much more dynamic, vibrant, and even chaotic at times: a sort of immediate switch from Europe to Asia.

To sum up my impressions for you: the Turkish side offers cheaper prices, very interesting historical sites and beautiful lagoons, while the Greek side has a much more relaxing atmosphere, better roads, and friendlier people. Don´t get me wrong: everyone was still friendly on the Turkish side, but I´d say people felt less open.

For this Cyprus travel guide, I´ll try to compare both sides, based on my personal experiences, so that you could plan your vacation better.

Firstly, I will not compare the food here, cause I love both Greek and Turkish cuisines. From a gastronomic point of view – both sides have a lot to offer.

The best hotel price/quality is definitely Northern Cyprus. You could get a 5 star all-inclusive for a really affordable price. However, vacations in Northern Cyprus would feel closer to visiting the Turkish coast (Bodrum, Antalya, etc.) rather than Europe or the Greek Islands.

Driving definitely felt more stressful in Northern Cyprus.  Any insurance that you may have purchased on either side is not valid once you cross the border. You´ll be obliged to pay for it again. As I’ve mentioned, I´ve hired a car in the south of Cyprus and traveled to the North for a day without problems. However, I was warned that if I rented my car in the North of Cyprus, I was not allowed to take it across the border to the South. I haven’t tested this one myself though. But just keep in mind this could totally happen.

Tensions in the air

Another detail. While crossing the border to the Turkish side I felt a sort of tension in the air. Even though these two parts of Cyprus coexist in peace today. You can sense there was a conflict at some point that had impacted many lives. But politics aside – my impressions of both sides come from a point of view.

All in all, Turkish vs. Greek side of Cyprus – it´s quite subjective. I´d say, it all depends on your travel preferences. For instance, my parents traveled to the Turkish side and didn´t like it. They said they clearly preferred the Greek Cyprus. While some friends of mine said they didn´t understand why everyone on the Greek side was warning them against visiting Northern Cyprus. They absolutely loved their trip and were in awe of the sights and landscapes.

I guess, the best thing you can do – is to visit both and make your own conclusions.

The best area to stay?

As I´ve previously mentioned – it all depends on the kind of vacation you´re up to. Personally, I love Paphos. It´s relatively quiet. A great match for a family vacation. There are some hotels in the area, but mostly it´s about – holiday rentals.

If you´re looking for clubs and nightlife – the undisputed party capital is Aiya Napa. The second best one for entertainment lovers is Limassol. Another alternative is, probably, Larnaca´s beachfront promenade.

Exclusive vacations?! – Also possible. Many celebrities head to the Aphrodite Hills, a closed area with some hotels and luxury villas, restaurants, golf&tennis courts, riding club, soccer academy… Even though it is obviously fancy and overpriced, the area is still really nice. We had friends staying there and I´ve visited several local restaurants on a few occasions. My impressions were generally quite positive.

The Cypriot food is influenced by Turkish, Greek, and Middle Eastern cuisine. So here you could find everything from meze and kebab, to Greek moussaka and Turkish baklava. But as I´ve already mentioned, on the South (Greek) side of Cyprus there´s more variety for the Greek food lovers and the North (Turkish) side is a palette of traditional Turkish flavors.

Shopping for local delicatessen: What to buy in Cyprus?

Let´s talk about sightseeing. For this Cyprus travel guide, I´ve put together a list of my places to visit. But you can imagine there’s more to the story here. Despite visiting Cyprus 3 times, I still haven’t seen it all. So, you can expect another Cyprus travel guide post in the next years – I´m planning to go back with my kids. In the meantime, check these top places you just can´t miss if visiting Cyprus one day.

Lefkara has been recently included by a few trusted travel editions in the Top 30 Most Beautiful Villages of Europe. It is a charming place with cobblestone streets and colorful doors&windows, where the Cypriot folk needlecraft art was born.

Rent a small boat in Latchi and head to the Blue Lagoon, a Caribbean paradise in Cyprus. Best to visit earlier in the morning, as many boats visit on tours. And yet this place is completely unspoiled and charming. Its beautiful crystal clear waters are simply stunning. Read more…

Kato Paphos Archaeological Park houses a collection of the most amazing mosaics, dating back to the 2nd century A.D. Art and history lovers – this place is a must for you Read more…

A quiet and spiritual place close to Paphos, founded by St. Neophytus in the 12th century. You could still visit the cut-out-of-the-rocks caves where he lived and wrote books. The cave with the cell of Saint Neophytos (Enkleistra) contains some of the finest Byzantine frescoes dating from the 12th to the 15th century. But you´re not allowed to take pictures of them.

As one of the most important ones on the island, Kykkos Monastery stands on a mountain peak, at an altitude of 1.318 m. It was burned down several times through the Cypriot history, but it´s still one of the welshes monasteries in Cyprus. Kykkos Monastery is also famous for its connection with the First President of Cyprus, who was once a monk here and was buried 3km from Kykkos after his death.

Cyprus famous in the Greek Mythology, as the seashore of Paphos, was the birthplace of Aphrodite, the Goddess of Love and Beauty. So, this Cyprus travel guide can´t miss Petra tou Romiou or Aphrodite’s rock.

According to the legend, this stone is an actual birthplace of the beautiful goddess who had emerged from the sea foam. Aphrodite is associated with youth, beauty, love and new life. Some believe that Aphrodite Rock and its surroundings possess magical properties. Rumor has it that those who swim around the boulder three times anti-clockwise would be blessed with eternal beauty. Another belief claims that if you swim in the area at midnight or find a heart-shaped stone on the shore you´ll find your epic love.

The city of Kyrenia is famous for its harbor, cobbled streets, Castle and Shipwreck Museum. However, I mostly loved its two nearby sights – St. Hilarion Castle and Bellapais Abbey.

The most breathtaking views of my trip to Cyprus?! – It´s St. Hilarion Castle without any doubt. Some say Walt Disney´s Sleeping Beauty Castle was inspired by this one.

Warning: bring comfortable shoes as it´s a rough clip to the top. And beware of the summer heat, go early in the morning or visit during spring/autumn months.

The Bellapais Abbey is an idyllic Gothic Abbey. It is currently used for and musical performances, but this place definitely has lots of old charm and history.

Nikosia is internationally famous for being the only divided capital in the world. Nicosia´s Green Line extends across the capital with various entry points for people to cross over

If you feel like diving more into the region’s history – include some local museums into your route: Leventis Municipal Museum of Nicosa, Cyprus Museum, NiMAC.

Another interesting place that immediately drags your attention is Buyuk Han, the largest Ottoman caravansarai on the island of Cyprus.

For more travel stories and useful tips for Cyprus check my Cyprus Pinterest board. 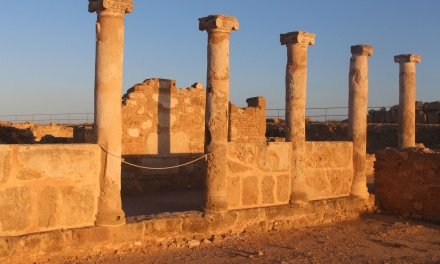 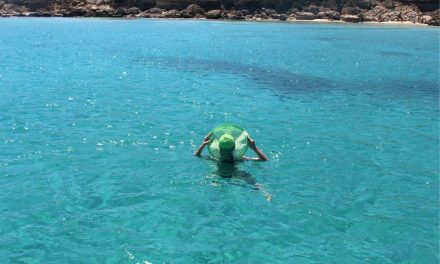